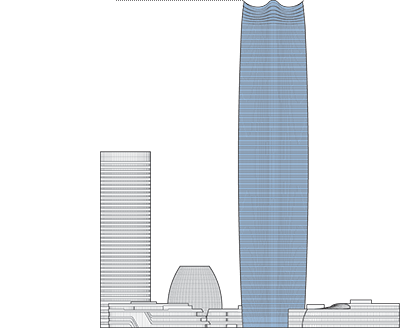 Located across the Huangpu River from Pudong, the Sinar Mas Center is a complex designed as a mixed-use community with three towers of over 100 meters in height. Tower 1, the tallest of the cluster, is a supertall office building constructed with a composite frame. Like many buildings constructed during this time period in China, Sinar Mas Center utilizes tubular steel columns encased in concrete for the perimeter framework and a concrete structural core. Floor plates spanning the distance between the perimeter and the core are then framed with steel beams, allowing for column free workspaces.

The tower’s design takes on an organic form, with the footprint shaped like a magnolia flower and then extruded upward for the entire height of the building. As the building rises from the ground, the structure bows outward with the floors gradually increasing in size until midway up the tower where the form then begins to taper inward. At the widest point, a belt truss spanning the height of two floors wraps around the structure’s perimeter. Each of the tower’s four sides has a concave curve, which increases in intensity as the building rises and culminates in a sculpted crown. The four corners of the building are rounded as well, creating no flat surfaces on the exterior curtain wall.

The 422,791 square meter complex includes China’s first W branded hotel and a sizable retail component located in a podium three stories tall, plus 2 additional floors underground and spanning the block between the three towers. The site plan was designed to function as a public space, with multiple entrances to integrate the block with the local surroundings. When completed, the Sinar Mas Center 1 became the tallest building in the Puxi area of Shanghai.