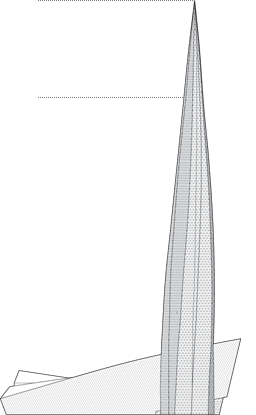 The Lakhta Center constitutes the epicenter of St. Petersburg’s Primorsky District, employing a wide range of public functions alongside transportation infrastructure in an effort to anchor a sustainable economic zone. Originally planned for the historic center of the city, the project – then named Okhta Centre – garnered widespread media attention as stakeholders contended with the various impacts it would have on the image of the city. Ultimately, the tower was moved to its present location, adopting a new name and a fresh context to inform the master planned development. The tower will provide space for offices, as well as several public resources, including a planetarium, medical center, performance hall, and a bank.

The theme of the tower's design is that of a lonely spire in a horizontal landscape, with a unique shape informed by concepts of extrusion, torsion, and tension. The building’s designers sought to create an optimal balance between office and public areas, ultimately conceiving a complete community within the building’s walls. Outside of the building, the plan for the surrounding area incorporates greened and landscaped spaces. An open 2,000-seat amphitheater and green promenade with fountains, paths, and benches are all integrated into the design.

Lakhta Center incorporates a number of innovative energy-saving technologies into its design. A double-glazed façade increases the level of thermal insulation, leading to a reduction in heating and air-conditioning costs. Similarly, the premises will be heated using excess heat generated from working technical equipment. To combat the dual effects of extreme height and a harsh winter, an ice formation control system will be implemented to protect the building’s façade and passers-by below from the dangers of falling ice. 2019 Tall Building Predictions for the Year to Come
22 Jan 2019, Chicago – CTBUH News
Check out our monthly predictions based on our industry intelligence to see what trends and milestones will shape the industry in the year to come! Twisting Tall Buildings
18 Aug 2016, Chicago – CTBUH Research
CTBUH has released a study that looks at the recent proliferation of twisting towers creating a new generation of iconic buildings throughout the world.

The Challenges of Delivering Iconic Tall Buildings Across the World: A Global Technology Transfer
26 Oct 2015 – Global Interchanges: Resurgence of the Skyscraper City