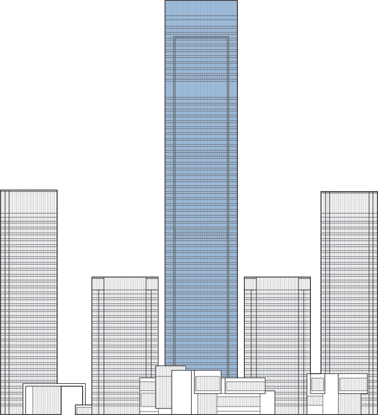 Located in the Jiangbei District, just north of where the Yangtze and Jialing Rivers meet, Chongqing IFS T1 is at the center of a newly established business district. The location for the five tower complex was originally platted as four individual development sites on a hillside, separated by roads and topographical elevation changes. These were combined into a single development masterplan with a mix of office, hotel and retail uses with a total area of nearly 600,000 square meters.

At the base of the towers is a 102,000 square meter retail podium featuring upscale boutiques, fine dining, a cinema and an ice skating rink. Tower 1, the tallest of the cluster, is located at the southwest corner of the complex and is a mixed-use office and hotel building constructed with a composite frame featuring a concrete core and steel perimeter columns encased in concrete and floor plates framed with steel beams. The structure has two belt trusses warping the perimeter at the 28th and 52nd levels, each of which spans a depth of two floors. The tower is clad in sleek glass curtain wall façade with metal panels creating two vertical accent lines on each side. The curtain wall extends well above the level of the main roof to crown the tower. The rectilinear footprint of the tower 1, as with the other towers in complex, is rotated relative to the local street grid to maximize views of the nearby rivers.

The complex redefined the newly established central business district of Chongqing in an area that was previously anticipated for exclusively residential development. With Chongqing International Finance Square near three iconic bridges as well as light rail lines numbers 2 and 9, the complex is well connected to greater Chongqing as serves as a new focal point for the city.