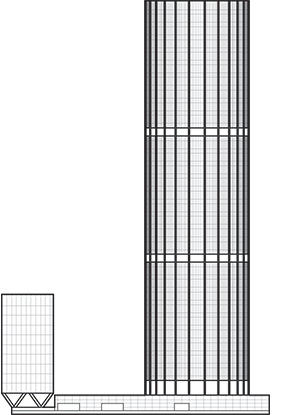 Australia’s tallest building upon completion, Australia Square Tower was an innovative structure for its time and was among the tallest all concrete buildings in the world. The building was conceived as a two-building complex occupying an entire city block which required the demolition of nearly 30 previous structures. The taller circular building is positioned at the western end of the block, while a publicly accessible plaza and the companion Plaza Building are positioned to the east. Both structures celebrate concrete as a sculptural material with structural expressionism, the Plaza Building’s floorplates are elevated above the ground level, set upon clusters of angled pilotis exhibiting structural load transfers between the building’s rectilinear frame and the ground, meanwhile the circular, taller tower has a perimeter of exterior concrete columns, tapering as they rise with curved concrete spandrels between them and a coffered ceiling in the lobby created from a radial ribbed floor system within the concrete floor slab.

During construction, quartz concrete was pre-cast into units of standardized sizes and used not only as a finish of the exterior façade, but also as formwork for the pouring of the reinforced concrete structure, assisting in shorting the construction schedule as the building rose at an average rate of one floor every five days. The circular form of the taller tower with the externalized skeletal structure provided for a highly efficient design achieving a total floor area of 12 times the entire site area, despite a small building footprint occupying only 25 percent of the block, while also providing for a robust resistance to windloads and a high degree of solar shading. Australia Square Tower is one of Sydney’s most famous buildings and is integral part of the city’s rich architectural heritage.