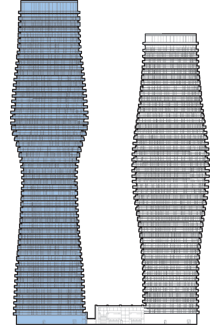 Mississauga, a suburb of Toronto, is like many fringe towns in that it is growing in relation to its neighboring metropolitan area, though it does not have any architectural precedents for this growth. At around 734,000 residents, the city is in demand of residential property. To win the first international design competition held in the Toronto area in over 40 years, the architect put forth a radical design for a curving and biologically inspired design. When the tower project was proposed to the public, initially with only one tower, the scheme was so popular that the units sold out just days after the release of the building plans. After this response, the owner decided to buy an adjacent plot and build a second tower to meet the demand.

While the typology of the skyscraper, typically a glass box, is usually associated with a large city, many suburban areas are now experiencing expansion which requires the implementation of high-rise buildings. As a bold step in this initial direction, the Absolute World Towers are the tallest additions to Mississauga’s predominantly low-rise urban fabric; they are two of only six towers over 100 meters in the area, standing out as an organic and recognizable gesture along the skyline.

Challenging the typical rectilinear approach to tall building design and responding to the lack of high-rise context, the design of the Absolute World Towers presents a highly organic and humanized design that aims to connect to both the city and its inhabitants. The curvilinear forms contrast with the generic rectangular buildings in the city, providing a welcome relief from harsh lines. Fondly dubbed the Marilyn Monroe towers by local residents, the towers parallel the fluidity and natural lines found in life.

In creating a flowing vocabulary for the building exterior, the design also accomplishes a unique experience for the interior as well; each residential unit is provided with a unique layout and views of Toronto or Mississauga from its balcony. The rotation of floor plates that creates the building forms results in a dynamic façade which differs from every viewpoint. As a testament to the unique experience of these towers, property values in buildings around them have increased and demand for views of the towers is high.

Though the original project brief only planned for one tower, the interaction of the two towers greatly increases the experience of the buildings. Instead of simply replicating the same building twice, the two towers, one taller than the other, have different angular rotations. While the shorter of the two employs a more gradual revolution, producing a subtler effect, the taller tower has a more drastic rotation at its middle. The negative space created by these forms is unlike any other.

To support the uniquely shaped towers, the structural system was considered in several ways to determine the best solution. The advancing and receding floor plates would require staggering of columns or transfer beams in a traditional structural system. A simple concept ended up being the best: a series of concrete load-bearing walls that cross through the plan of the buildings provide ample vertical and lateral support, while responding to the singular geometry of the form.

At the forefront of a movement among tall building designers to rely on biomimicry, the buildings are spearheading organic form and a connection to nature. While other building designs have created complex curvilinear geometries, the Absolute Towers accomplish it with a straightforward concept and structural solution. In light of the commercial and critical success of the flowing towers, upcoming building projects may take inspiration from this simple and grounded approach to accomplish their goals.

As Mississauga continues to grow, future projects can rely on the precedent set by the towers in both their concept and execution. Eventually, the buildings will become part of a more dense urban setting, but will still have a unique effect on their surroundings.

Twisting Tall Buildings
18 Aug 2016, Chicago – CTBUH Research
CTBUH has released a study that looks at the recent proliferation of twisting towers creating a new generation of iconic buildings throughout the world.

CTBUH Canada Inaugural Meeting
2 May 2013, Toronto – Event Report
The first event organized by the newly formed CTBUH Canada Chapter was held at the University of Toronto on May 2, to a highly enthusiastic reception.

Absolute Towers Chosen as Featured Building
1 Dec 2012, Mississauga – Featured Tall Building
The Absolute World Towers are the result of a public-private partnership and an international design competition, which chose a new Chinese firm doing its first work in North America.

Low-Rise to High Density in 15 Years: Inversion and the Toronto Exurb
Jan 2019 – CTBUH Journal 2019 Issue I